ABOUT US • OUR TEAM

At VLVT SALON we are about more than just a set of hair services. Although just one part of you,

your hair can say a lot about who you are and we want to help you achieve the look you want.

We are not a TRIBE, we are team of individual artists,

with our own mindset and one goal, to bring the best look for your life and personality.

BLASTS from the PAST 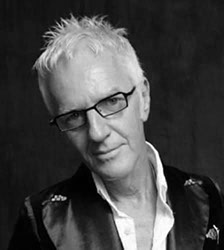 Some people have that rock star style. You know, they are edgy, hip and you idolize them, but at the same time, they keep that sleek and mysterious vibe that is simply untouchable. We have a rock star hair stylist living right here in Downtown St. Pete, Albie Mulcahy, owner of VLVT Salon, located at 538 Central Avenue. Even for us adults, he is the type of person you want to be like “when you grow up.” Albie is a true Rock-n-Roller!

Born in Boston, Mulcahy has traveled to over 35 countries for over 35 years styling and educating hairdressers in the fashion industry. He has lived in all of the major fashion capitals of the world (such as London, Tokyo, NYC, and LA), worked his magic for high-end runway shows for Prime Ministers, was friends with the late Paul Mitchell, and has even been one of the few Americans to be featured at the prestigious Alternative Hair show in London, England. He currently continues to travel around the globe to fulfill his rich and famous clients’ styling needs. (He is just that good!) 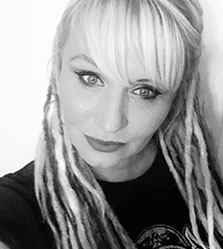 As a self proclaimed Star Trek Nerd (Trekkie) Ann has in her 27 years as a hairdresser worked with and attended classes with some of the best known hairdressers in the industry. Graduating from Loraines Academy in St Petersburg in 1991 she has always had an obsession and Passion for the science and Technogy behind the products she uses which in turn helps her produce quality results .

Her color and finishing work for both Men and Women have always been focused on the health and integrity of the hair.

She also has a Love for Extension and Dreadlocks application and as you can see , Ann has a lot of fun in her personal life as well as work

“I first met Ann years ago when coming through the Tampa area doing shows and Classes, when I found out she was interested in working with me at the VLVT salon, I jumped on the opportunity.” Albie

Michele Pillucere is a native of  St. Petersburg and has accomplished thirty three successful years in the hairdressing industry.  'Chelle', as her friends call her, excels in dry hair shaping, which is a very particular technique that she picked up many years ago from an artist she saw on stage at the IBS Show in New York. Upon returning home, she was determined to learn more about this artist and within a few days, she happened upon an article in the St Petersburg Times announcing "Albie Mulcahy", the artist on stage, had  relocated to her hometown and opened a salon. What fate

Chelle's style is timeless and classic and she is inspired by Mid Century Modern design and British Mod fashion and music from the 1960's. This led her to study and take courses at the Vidal Sassoon Academy in New York and Miami. Today clients from all over, come to Chelle for her expertise in dry shaping which is paired with artfully placed color giving them a bespoke service that is a step above, everytime.

“When Chelle told me she wanted to come back to VLVT after 24 years in another salon, I was so excited! We belong in the same salon together.” Albie 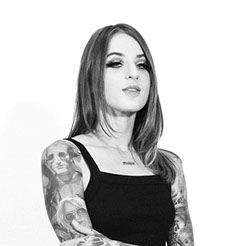 “I’ve been in this beautiful industry 10 years and I’m ready to GLAM UP St. Petersburg, FL !” Having reacenty move to St Pete from Long Island NY she specializes in Vibrant Fashion colors , Corrective color , Highlights/ Lowlights , Balayage services, and all aspects of color SHE does it all! Blonding is her FAV. In addition Angela  studied . In addition Angela  studied Make Up design in Paris France where she lived for several months, Her make up skills are perfect for weddings, Formal events as well as for that  special photo shoot 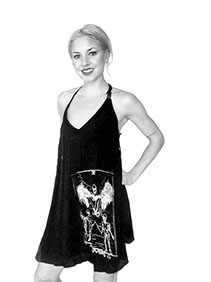 After ten years as a mainstay in the art community of Brooklyn, New York, Whitney decided it was time to trade in the long winters for the warmth and sun of Florida’s Gulf Coast. The thalassic tableau has inspired a great leap in her style to vibrant color and a sophistication in detail. This exploration in content and scale is signature to Lynch’s ever evolving style and refusal to stagnate.

Whitney’s pursuit of a life in art began at The Virginia Commonwealth University, where she earned a Bachelor's Degree in Sculpture and Extended Media. Not one to be limited by any single format, she also studied painting, videography, stop-motion, installation, and special effects makeup. It was at VCU that Whitney fell in love with mixed media— this passion “to dive in, get her hands dirty and create” continues to this day.

Upon graduation, Whitney relocated to New York City. Making a name for herself in the community as an anarchist spirit with undeniable natural talent. Her name was a-murmur amongst collective shows throughout the city. Eventually leading to two wildly acclaimed solo shows the first on Metropolitan Ave, Williamsburg Brooklyn in 2010 The second in Manhattan’s lower East Side in 2014.

While the shows reached capacity, lines of patrons around the building waited in the cold to witness the immersive experience, which involved gallery installations of life-size Cyborgs, more than 20 of Lynch’s signature painted latex masks,various sculptures and paintings. If that wasn’t enough, Lynch’s short films played on the recessed wall of the gallery throughout the evening. This showing, as successful as it was, proved Lynch’s ability to create a world all her own… one that no matter how rousingly macabre, people would want to explore.

Her success in the DIY art community proved fortuitous when the E-commerce powerhouse, Etsy hired Whitney as their Event Planner, utilizing her acumen in grand scale installations and tasking her with their renowned “themed” public relation fundraisers.

She continued her solo work during this stint at Etsy. Creating her own version of tarot cards.   Small detailed drawings done in pen and ink  filled her sketchbook.  She was inspired to transfer her drawings onto clothing by methods of screen printing . Later this clothing line became another project, her online clothing store.  At Etsy she began breaking new ground as a director, cinematographer, set and costume designer in her boundary-pushing, David Lynchian meets Rob Zombie style short films.

Whitney Lynch’s new work reflects her migration south. A refined and fulgent expression in mixed media, painting is a return to form for Lynch, having picked up painting as early as she could hold a brush. It has been through this series that Whitney has realized the deep meditative benefits of the art form and it shows in the serenity and illumines quality of the work.

And so it was no surprise that in March of 2020, Whitney was asked to paint for the Mize Gallery in Downtown St. Pete. The show entitled “Ingredients”, inspired large, hyper-realism from Lynch. Because of the pandemic, her painting of “Fig and Bacon” was shown virtually, receiving acclaim from a safe distance and advancing her in the St. Pete art community.

During these unpredictable times, Whitney has remained focused on the work. The walls of her bungalow  fill with new abstract and realistic paintings as she prepares for two more shows at the Mize Gallery as well as multiple commissioned pieces. While also selling her clothes online and prepares for upcoming markets.

Whitney Lynch’s fans will follow her wherever she leads, and through the excitement and unpredictable nature of her creative pursuit, it is clear those fans are loyal to her work because of her continuity of spirit. With so much already accomplished, it is that much more exciting to say it feels like just the beginning for this phenom.

You can find her work at whitneylynch.com and her instagram Darktarotclothing. .